Davis Industrial is an award winning, privately held, certified Woman-Owned Business; operating on a regional scale providing the most comprehensive conveyor system solutions in the industry. A proven industrial services leader which specializes in solution-driven conveyor maintenance, metal fabrication, and bulk material handling components. Davis Industrial has an extensive inventory of world class conveyor products in stock, expert personnel on hand and available 24/7/365, and the unrelenting customer focus needed to deliver reliable results, safely, every time. In an industry that is quite literally responsible for ‘moving the world’, Davis Industrial is growing rapidly because we always focus on Doing the Right Thing.

Not many women can say they successfully acquired their own business in a male-dominated field and survived the recession, all at the age of 21.

“If you asked my parents what I wanted to be when I grew up, I always wanted to be a business owner,” Stephenie Davis said. “Things lined up to work out that way, but it was always a goal of mine ever since I was a little kid.”

Enrolling in college early, Davis received her Associates Degree at the same time as her high school diploma and was offered a full ride to the University of South Florida. Craving life experience instead, Davis decided to decline the scholarship and began searching for an outside sales position.

An opportunity opened at a Conveyor belt service company, and Davis fit the mold.

“They were looking for a female to try sales and I decided to go in for an interview and the owner gave me the job right on the spot. He basically wanted to see if a woman in a man’s world could be successful and turns out, it works,” she laughed. “My supervisor said he wasn’t going to train me, I had to go out and learn everything on my own.  The next four days were spent in the office learning how conveyor belts work and where to find them. I had no idea, it’s not just something you’re exposed to in high school.”

Only 20 at the time, Davis dove headfirst into the field and started meeting customers and learning the ropes of the conveyor service industry on her own. Meanwhile, learning the company was up for sale, she realized how much potential the company had.

“The current ownership didn’t really care about the customers or the employees, it was kind of a pet project for them. In 2008, I decided I was going to buy the company and right after closing and taking ownership, that’s when the recession hit,” she said. “We didn’t see it coming and after the ‘oh crap, what do we do now’ moment, I just hit the ground running. We had three employees at the time, and I had payroll to meet so I went out and met some customers from every industry I could think of to diversify the company and to draw up some business to keep this thing a float – and we did.”

Today, Davis is the President and CEO of Davis Industrial, an industrial services company that specializes in conveyor maintenance, metal fabrication, and power transmission. With almost 50 employees, they serve customers throughout the State of Florida, the United States, the Bahamas and the Caribbean with some export business into Latin and South America. With some recognizable customers like Walt Disney World, Universal Studios, Amazon and Frito Lay under their belt in addition to all the lesser known aggregate and recycling facilities, Davis Industrial has quickly become a market leader.

“Most people don’t realize that anything you consume, or you use, has probably touched five or six conveyor belts in its lifetime,” she said. “We’re the guys that make sure those conveyor systems continue to run.

Davis says the competitive edge in her company starts with their emphasis on customer service.

“Everyone says it, but honestly it’s our customer service. We’re in the service industry and its amazing how real service is dead out there. It’s about being available to our customers, being willing to put the materials in stock that they need so they don’t have to keep it on their shelves and having our guys available 24/7, 365 answering the phone at two in the morning,” she said. “We genuinely care about the customer, keeping them up and running and making them look good.”

After a few years of growing, Davis began investing in inventory – another way to support her customers.

“We eventually got a full stock of inventory in both Tampa and Miami consisting of mostly mission critical components for our customers and continue to expand that inventory as we see the need. If they go down in the middle of the night, chances are  we have the right product on the shelf that will get them back up and running,” she said.

Their preventative maintenance program offers customers a way to predict breakdowns before they happen, an area that Davis Industrial’s competitors tend to stay away from.

“By partnering with customers and keeping them from breaking down, we can increase their effectiveness resulting in lower costs, helping the economy as a whole,” she said. This echoes their mantra of Moving People. Moving Products. Moving the World.

Lastly, in 2013, Davis chose to begin their own metal fabrication division after outsourcing most of it, losing control of cost, quality and lead times.

“We hired experienced guys that knew how to weld and fabricate and built a full service fabrication shop from there and now we’ve got all the tooling and equipment it takes to do metal fabrication work to further assist our customers,” she said. “We’ll do anything from patching a hopper? to building an 800-foot-long conveyor system to fabricating a trellis system for a University walkway.”

Overcoming Challenges and Looking Toward the Future

When she first bought the company, Davis says the challenge wasn’t finding people due to all those who unfortunately lost their jobs during the recession. However, over 10 years later, Davis is now facing the challenge of finding the right people with the talent needed to excel at Davis Industrial.

“In the US, conveyor service is not one of those things that you can go to trade school and learn. You can’t go to college for it either, it’s all on the job training,” she said. “Looking at the people that are coming up through school and through college, nobody really wants to be a conveyor service technician or metal fabricator when they grow up, it’s not taught.”

With two locations already, Davis is already beginning to execute their 10-year plan which includes five new branches in Florida, Georgia and Alabama. Expanding is underway in North Florida, making the ways they can help their customers even greater.

“If our customers need us in the middle of the night, we can get to Tallahassee or Mobile, but it’d be a lot easier if we have a branch up there to be local for our customers,” she said.  “It’s really continued growth.”

Davis Industrial will also begin exporting more materials into the Caribbean and South America within the next year.

What it Means to be an Honoree

As a 2019 Florida Companies to Watch Honoree, Davis says the award is another way that she can highlight the hard work of her team members.

“They wanted it on their email signatures, and they want shirts made,” Davis laughed. “It’s really them who have gotten us to where we are today, so they’re excited.”

“It takes hard work but never give up. I never thought that I’d be a female in a man’s world, trying to go out there and sell conveyor belts and talk to guys about production plans for their plants, but I love it” she said. “Don’t give up on whatever dreams you have, you can do it if you’re willing to work hard, not give up and not take no for an answer.”

They also have an in-house Community Service Task Force, where employees pick certain philanthropic projects that are near and dear to their hearts.

Links
Sign Up for the Davis Industrial Newsletter
Proud Member Of: 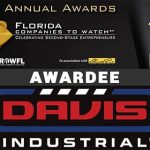 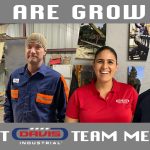